When it comes to texting, the period, full stop, point – whatever you call it – has been getting a lot of attention.

People have begun noticing slight changes to the way our smallest punctuation mark is deployed, from declarations that it’s going out of style to claims that it’s becoming angry.

The period is merely one example of this shift, a change that has opened up new possibilities for communicating with written language. Just as we have different styles of speaking in different situations, so do we have context-dependent styles of writing.

Reading between the periods

Though periods can still signal the end of a sentence in a text message, many users will omit them (especially if the message is only one sentence long). This tendency now subtly influences how we interpret them.

Because text messaging is a conversation that involves a lot of back-and-forth, people add fillers as a way to mimic spoken language. We see this with the increased use of ellipses, which can invite the recipient to continue the conversation. The period is the opposite of that – a definitive stop that signals, as linguistics professor Mark Liberman has explained, “This is final, this is the end of the discussion.”

For some, this can appear angry or standoffish.

Earlier this year, psychologist Danielle Gunraj tested how people perceived one-sentence text messages that used a period at the end of the sentence. Participants thought these text messages were more insincere than those that didn’t have a period. But when the researchers then tested the same messages in handwritten notes, they found that the use of a period didn’t influence how the messages were perceived.

In a 2007 study by linguists Naomi Baron and Rich Ling, multi-sentence text messages often had punctuation to indicate where the sentences stopped, but only 29 percent of these texts had punctuation at the very end of the message. The reason, Baron and Ling explain, is that “the act of sending a message coincides with sentence-final punctuation.”

But of all the things to feel when seeing a period at the end of a text message – whyinsincerity?

The answer could have something to do with a term used by linguist John J. Gumperz: “situational code-switching,” which is when we change how we talk depending on where we are, who we’re talking to or how we’re communicating.

A common example is the way we talk in a job interview versus at a bar with friends. Typically, a speaker will use much more formal language in an interview than when hanging out with peers. If you talked to your friends the same way you talked during a job interview, it would probably give a stilted, distant feeling to the conversation.

Scholars originally investigated situational code-switching in spoken language because spoken language was used in both casual and formal settings. In the past, written language was almost always tinged with a level of formality because it was associated with permanence in books and written documents.

However, now that text messaging and social media have given their users an outlet for casual written language, differences between writing styles can be seen.

The use of the period is one example of situational code-switching: When using one in a text message, it’s perceived as overly formal. So when you end your text with a period, it can come across as insincere or awkward, just like using formal spoken language in a casual setting like a bar. 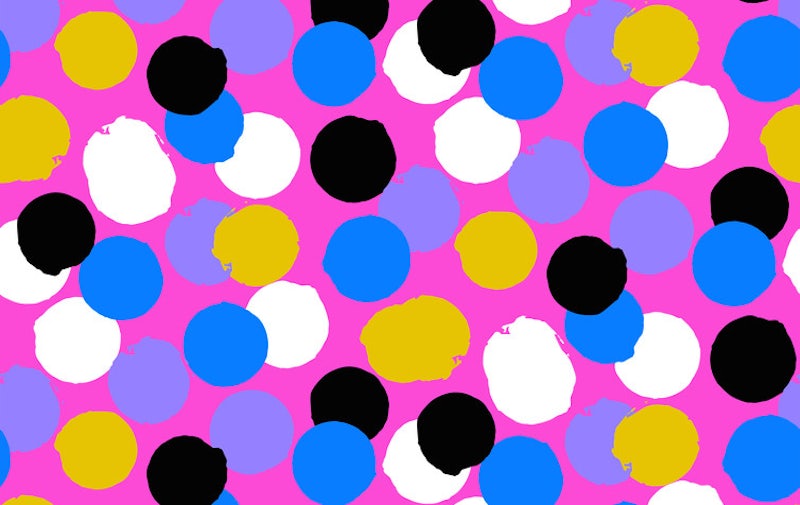 Social norms dictated by code-switching could explain why using proper grammar in a text might make you look insincere. ‘Paint Dots’ via www.shutterstock.com

A different form of sincerity

Linguist Deborah Tannen described a similar phenomenon, noting that repeated exclamation points in a message can convey a sincere tone, like in the following text message:

JACKIE I AM SO SO SO SORRY! I thought you were behind us in the cab and then I saw you weren’t!!!!! I feel soooooooo bad! Catch another cab and ill pay for it for youuuuu

Note that this message does not contain a message-final period, since that may convey insincerity that would contradict the apology being presented. Instead, the sender uses the non-standard long vowels in “soooooooo” and “youuuuu” as well as five exclamation points at the end of one sentence.

Compare this to a standardized version of the text message:

Jackie, I am so sorry. I thought you were behind us in the cab and then I saw you weren’t. I feel so bad! Catch another cab and I’ll pay for it for you.

This more formal version, according to the arguments made by Tannen and Darics, reads more like a work email sent to a colleague than one to a friend sincerely and fervently apologizing for a transportation mishap.

It’s a bit counterintuitive, but using formal language may undermine the sincerity of the apology; in order to convey the “right” message, it’s important to know the proper protocols. This may explain why some people’s text messages seem stilted or awkward: they’re used to writing with a formal style that doesn’t translate to the casual medium.

Will texting erode our writing skills?

In the media, there’s been a fair amount of debate about whether texting – or using overly casual language – can “ruin” someone’s writing ability. (Examples include theLA Times, the BBC and The Daily Mail, to name a few.)

However, past research into situational code-switching in spoken language has shown that a person’s ability to code-switch can signal social competency, can affirm one’s sense of identity or membership in a community and may be an indicator of high intellectual ability in children.

Studies like the recent work of psychologists Gene Ouellette and Melissa Michaudhave shown that the use of text messaging and “textese” has little relationship to how someone will score on spelling, reading and vocabulary tests. Meanwhile, a study out of California State University found little use of “textisms” in formal letter writing assignments completed by students. This observation supports work like a study by psychologist Beverly Plester and colleagues, who found that an increased use of textese was correlated with higher scores on verbal reasoning ability tests. They suggested that the preteens in their study were able to “slip between one register of language and another, as they deem it appropriate.”

This shows that frequent and fluent users of casual written language can often readily code-switch: they know to put that period at the end of every sentence in a formal writing assignment. Some educators are even beginning to incorporatelessons about formal and informal writing into their classrooms, which can help students identify those situations that require the use of different styles.

Instead of ignoring or deriding the variation in written language, embracing the change in language – and the ability of speakers and writers to code-switch – can lead to better communication skills in all contexts.

Knowing when a period might indicate insincerity is just one of them.

This article was originally published on The Conversation. Read the original article.

Source for this reposting: The New Republic

Welcome to Leximania, a site that strives to become the archive of resources, news, and links while being a hub where translators, linguists, and language technologists can find information on conferences, developments in the industry and other nerd friendly topics.